YOLOv1: You Only Look Once

The You only look once (YOLO) algorithm is the first in a series of 4 iterations of the algorithm. Developed by Joseph Redmon et al, it was the first novel object detection algorithm that performed detection using a unified end-to-end neural network in period of multi-stage detectors.

This tutorial will show you how to train an object detection deep neural network using the first version of the YOLO algorithm (YOLOv1) from scratch. It would also explain how to augment your dataset, the loss function used and how to perform inference using the PyTorch framework.

The problem of determining what is in a given image and where, is a challenging problem in Computer Vision that has been worked on since the early 1990s. In formal terms, the task in object detection is to compute a bounding box around objects we are interested in and also determine the classes the objects belong to (e.g humans, cars, dogs etc).

Early attempts in Object detection consisted of hand crafter classifiers such as the Viola-Jones detector and gradually evolved to learning based methods such as the R-CNN. The paper, Object Detection in 20 Years: A Survey, by Zou et al provides a very good overview on the history of object detection from 1990s to 2019.

Following the success of convolutional neural networks in the ImageNet (ILSVRC) challenge in 2012 (remember AlexNet). Girshick et al proposed RCNN which leaped forward the field of object detection after years of stagnation. RCNN and other multi stage detectors learning based detectors usually consisted of

The 'You Only Look Once (YOLO)' algorithm

YOLO (available online at arXiv:1506.02640) unifies all the stages of the multi-stage object detectors and as a result it is a much more simpler algorithm and a lot faster to train. It uses a single deep convolutional network to directly predict the class probabilities and boinding boxes. YOLOv1 was extremely fast compared to the other deep learning detectors at the time, per the author, it runs at 45 frames per second (fps) on a Titan X GPU.

This adaptation of YOLOv1 uses some modern techniques borrowed from later versions to make this current version more robust during training. Techniques such as data augmentation, Global average pooling and Batch Normalisation were used. This current version of YOLO while being fast does struggle with localisation accuracy compared to other multi-stage detectors like RCNN, although these issues would fixed in later versions v2, v3 & v4 (recently released in 2020).

This section explains how YOLO performs unified detection. Without a selective search algorithm to propose bounding boxes, YOLO divides the entire image into a grid and predicts bounding boxes at each grid cell. The predictions at each grid cell contains all the revelant information needed to localise and determine object classes in the image. This is explained in greater detail as a series of the following steps

The PascalVOC dataset, is a dataset for object detection, classification and segmentation. The total size on disk is about 5.17GB for the 2007 and 2012 dataset, which makes it perfect for grokking the performance of the YOLOv1 algorithm.

The object class is denoted in 'annotation -> object -> name' tag, and this would be one of the 20 classes in the Pascal VOC dataset ("aeroplane", "bicycle", "bird", "boat", "bottle", "bus", "car", "cat", "chair", "cow", "diningtable", "dog", "horse", "motorbike", "person", "pottedplant", "sheep", "sofa", "train", "tvmonitor"). \ The bounding boxes are encoded in the top-left and bottom-right coordinates (min-max encoding), however, based on the YOLO algorithm, predictions are made with reference to the object centers (center encoding) and not their min-max coordinates. Therefore, we need to convert from the min-max encoding in the annotation file to the bounding box center encoding for use in the YOLO algorithm.

Where W,H are the width and height of the image respectively, Converting from bmin−max​ to bcenter​ can simply be defined as

This is easily implemented as

We currently have bcenter​ which contains the x,y location of the object center and the width and height of the object, scaled between 0 and 1.

This is formalised as

During the loss calculations, the square root of the width, w​ and height, h​ are used as they ensure stability and prevent the loss function from penalising small width and height predictions.

In our implementation, we assume that the model outputs bounding box coordinates in byolo​, therefore we convert to bcenter​ for loss calculations as that was much easier to do. Therefore, each observation from the dataset is encoded as

Data augmentation introduces variation into our training dataset without increasing the number of observations. This can help introduce invariance into the network and also increase its accuracy. \ The most recent version of YOLO (v4), attributes part of its increase in average precision (AP) to the modern data augmentation techniques it used, which they termed the Bag of Freebies (BoF), a repository of pixel-wise adjustments e.g CutMix, CutOut.

The following Data augmentation were used in our implementation

Here a Gaussian blur is applied to the image to reduce the amount of detail in the image so the network learns higher level information about the objects such as their shapes and distinguishing features. The documentation for the gaussian function used is available at the PIL ImageFilter documentation

This augmentation aims to reduce dependency on the orientation of the object, as the image of a dog still contains a dog regardless of how it is positioned but sometimes it is possible the network associates a certain orientation with objects.

The image and its detection annotations are both modified to produce the horizontal and vertical flip. PyTorch's vertical flip function and PIL's transpose function were both used.

This technique is also referred to as CutOut. It is one of the newer data augmentation techniques also used in YOLOv4 and it's PyTorch documentation is available here. Here random rectangular regions in the image are erased, introducing a form of occlusion, further making the network more robust.

The parameters used in our implementation is shown below

There are some "significant" changes between the original YOLOv1 paper and ours. As my main goal is to simply the YOLOv1 algorithm and save time training, my architecture is different from the original implementation's 'backbone' and 'neck' parts of the network.

Defining the Model in PyTorch

Next is to define the layers in the YOLOv1 network architecture

Now we can define the forward pass of the network

This section covers how I trained the YOLOv1 network, the missing pieces of the puzzle yet to be covered are how to choose the "best" bounding boxes amongst the ones predicted at each grid cell and the loss function used for training the network.

The output prediction tensor from the YOLO model is of size S∗S∗(B∗5+C). In this section, we still assume S=7,B=2 and C=20. For any arbitrary grid cell, there is a prediction of size $ 1 \times 1 \times 30$ illustrated below.

In the case where there is no ground truth prediction at that cell, we simply choose the bounding box with the highest object confidence i.e

The authors claims that this leads to specialisation between the predicted bounding boxes at a particular grid cell as one of the grid cell's bounding box predictions could specialise in predicting certain size of objects, aspect ratios or classes of object.

The box with the highest object confidence is also used to make predictions at inference time. My bounding box selection strategy is implemented in the file 'loss.py' in the corresponding Github repository for this article.

This is also known as the Jacquard Index and it is simply a measure of how similar the predicted bounding box is to the ground truth bounding box.

This function is very important and it plays a HUGE role in our accurate our model is. In the context of the YOLO algorithm, it is what we use to select the best predicted bounding for use in loss calculations. Andrew Ng has a really good explanation of the IoU function in his video course series C4W3L06 Intersection Over Union which I highly recommend watching.

Let the green and red bounding boxes be A, B respectively. Then their top-left and bottom right coordinates are defined as

In my implementation, the IoU function is defined as

Finally, the intersection over union, IoU, of A, B can be calculated as

As the CNN performs regression by predicting the bounding box and class probabilities directly, the loss function is simply a sum squared error between the predicted tensor and the ground truth tensor. 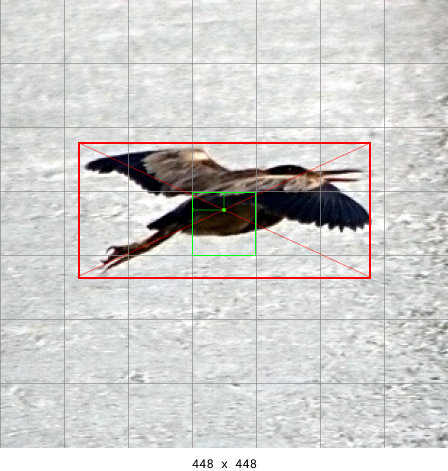 In a typical image, how many grid cells can you expect to contain corresponding ground truth annotations and how many would not? Using our bird example image, only 1 of the 49 grid cells (the green one) would contain a corresponding ground truth annotation. Therefore, the loss function needs to take into account that for most images, majority of the cells would not have any corresponding ground truth boxes assigned to them. Hence the introduction of the hyper parameters λobj​ and λnoobj​ to serve as a weighing factor on the loss value generated at each grid cell, this is kind of class weighted classification. The values recommended by the paper are λcoord​=5 and λnoobj​=0.5 and the consequence of not weighing the loss value would be exploding gradients due to large loss values during training.

To implement this loss function, it would help to examine it by breaking down into smaller digestable parts.

The authors of the paper have provided their pretrained weights online at , this weights are available for a network modelled after their own architecture. As my architecture differs from the official implementation, my weights file, ResNet50, would only work for the architecture specified in my Github repo. It can be downloaded using the following command

Both the architectures mentioned above have been trained on the Pascal VOC (2007 + 2012) dataset, with their respective backends pretrained on the ImageNet dataset.